Daraga Church Bicol Philippines
Located on the southern end of the island of Luzon, Bicol is a popular destination that is rich in culture and history. It has plenty of natural attractions, good infrastructure and some fine beaches that are great for surfing, diving, or relaxing and taking in the sun. Travel Authentic Philippines offers a variety of Bicol Tours.

Bicol is a destination suitable for all with its historical sites, eco-tourism and watersports. There is also the famous Mayon Volcano, Bulusan Volcano Natural Park, and numerous stunning waterfalls. Let’s not forget about the whale sharks and manta rays, which is something that Bicol famous for.

There are a number of ways to get in and around Bicol. The Legazpi International Airport in Legazpi City is the main air hub in the region, connecting it directly to Cebu and Manila. There are also a few other airports in the region, including Naga Airport, Moises R Espinosa Airport, and Virac Airport.

Bicol residents are known as Bicolanos and their mother tongue is some form of the Bikol sociolinguistic language. The region has a thriving culture with many colorful festivals, both religious and otherwise.

Like the rest of the Philippines, Bicol has a tropical climate. It is dry from February until May or June and wet for the remainder of the year. April is the driest month and December is the wettest, though typhoons are most common between July and October. 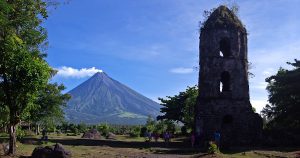 The 156 meter high Ligñon Hill just outside of Legazpi City is a great place to snap photos of Mayon Volcano and can easily be reached by car from the city. There is a zip line, a restaurant, a souvenir shop, and a viewing deck with telescopes at the top of the hill. Legazpi City itself also has a few other things to see, like the waterfront Embarcadero and the Legazpi City Museum.

Naga City’s Penafrancia Basilica Minore is home to the shrine of Our Lady of Penafrancia, one of the most popular shrines in the country. It is patterned after the one in Spain and is often visited by pilgrims, devotees, and of course tourists.

Some of the most stunning stretches of beach in Bicol are in Catanduanes, an island province to the east of Luzon. Of these, Mamangal Beach is one of the most exceptional, completely untouched and ideal for swimmers and sun worshippers.

There are numerous churches, monuments and historical sites all over Bicol, with the city of Daet being a great place to start. Here, visitors will find Parroquia de San Juan Bautista – one of the oldest churches in the region-, the Rizal Monument, and Pineapple Fountain, among other sites. 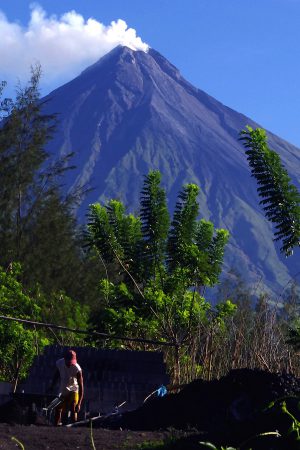 Mayon Volcano Bicol Philippines
Bicol is noted for its superb surfing, although it offers plenty of other watersports, including diving, snorkeling, kite surfing, kayaking, and swimming. There are also plenty of things to enjoy on land, like hiking, caving, and firefly watching.

Surfers head to Bagasbus Beach on the eastern coast of the island. This beach combined with Puraran Beach offer some of the best surfing and kite surfing in the country.

Donsol is the world’s whale shark capital and the massive beasts can actually be seen here year round. One of the most rewarding things to do is to go swimming with whale sharks, with boats leaving daily from the Donsol Whale Shark Interaction Center. Swimming with whalesharks features in most Bicol Tours.

The waters that surround Ticao Island are some of the best for diving, particularly for those wishing to swim with manta rays. There are five dive sites surrounding the island, ranging from 14 to 29 meters. It is also possible to dive around the island from Donsol, where there are even more diving outfitters.

The adventurous can go caving in Bicol, with Virac on the island of Catanduanes being the best place to do this from. The most well-known caves in the area are Buyo Cave, and the Marilima and Talisay Caves.

For something a little bit different, the Camsur Watersports Complex has it all. This six-hectare world-class watersports complex is home to a 6-point cable ski system as well as offering wakeboarding, kneeboarding, waterskiing, and wakeskating. 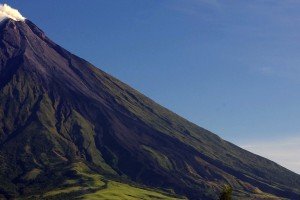 Mayon Volcano Bicol Philippines
Bicol is rich in culture and there are numerous festivals that highlight this throughout the year. Some of the festivals are of course religious based, while others showcase the uniqueness of the region. Join us on one of our Bicol tours.

Rodeo Masbateño is Asia’s only rodeo and is celebrated each year in April in Masbate City. It features 10 competitive rodeo events, with the ‘figure of eight’ competition being the highlight of them all.

One of the most colorful festivals in Bicol is the annual eight-day Sarung Banggi festival that is held each May and showcases numerous religious and cultural activities from the region. The festival itself is dedicated to Potenciano V Gregorio’s love song ‘Sarung Banggi’, with the main highlight of the event being the street dance presentation.

Legazpi’s City’s non-religious Ibalong Festival is held every August to celebrate the epic folk story Ibalong. It is a colorful event where people dance in the streets wearing masks and costumes that represent the heroes and villains in the story.

On the third Saturday in September, Naga City holds its annual Peñafrancia Festival to celebrate the feast of Our Lady of Peñafrancia. This is one of the busiest festivals in all of Bicol, attracting over six million people each year. The city also holds the annual Kamundagan Festival every Christmas by lighting the Plaza Quezon Grandstand’s Christmas Village, with different fantasy-themed Christmas shows being held each night until Christmas Eve. Join us on our Bicol Tours!

Donsol is a small rural town in coastal village close to Legazpi in Sorsogon. It has recently become a favored destination to swim with whale sharks over Oslob, due to the responsible way in which it practices tourism.

Swimming with whale sharks, locally known as butanding, was featured as the Best Animal Encounter in Asia by Time Magazine in 2004. Whale sharks can be seen between November and June, with presence peaking between February and May. This is one of the best Bicol Tours.

The presence of whale sharks in the town of Donsol was known to the local residents over 100 years. But the locals believed these gentle giants were dangerous. This wrong notion changed when in December 26, 1997, a group of scuba divers led by Romir Aglugub – a PADI diving instructor, discovered its presence, and interacted and came in contact with the whale sharks. Even the members of the diving group of Romir was having second thought if the fish is docile, until the instructor led the way into the water and came in contact with the whale shark. Copy of video footage taken by the group was passed on to the media and the WWF-Philippines. By March 1998, Donsol became world-class tourist destination and now known as the “Whale Shark Capital of the World”.

Interaction with the whale sharks is regulated by the local Department of Tourism (DOT) office. WWF guidelines are generally observed to protect the sharks. Rules include limiting the number of swimmers per boat to six, no scuba divers and staying further than three meters from the sharks. In recent years the number of male sharks have out-numbered female sharks by 20:1. The females that are seen are generally large mature adults in the 7m ~ 9m range. Increasing numbers of sharks show propeller marks on their backs. Anecdotal evidence from local fishermen suggests that prop strikes are from fishing boats in the off-season, rather than from tourist boats in the main February–June tourist season.

In 2006 five sharks were found dead on the surface, within 30 miles of Donsol. They had all been shot at close range. One shark had 13 bullet wounds to the head. The locals blame this on commercial fishermen shooting the sharks if they are caught in their nets. Manta rays, which are also protected in the Philippines, are also over fished and sold in local markets in the Sorsogon area. Groups from Singapore, Hong Kong, Taiwan and the Philippines make up the largest groups of visitors. Most book guided tours with dive centers familiar with whale shark interaction.

Another place where you can see whalesharks is Oslob on Cebu.

Mayon, also known as Mount Mayon or Mayon Volcano, is an active stratovolcano in the province of Albay in Bicol Region, on the island of Luzon in the Philippines. Renowned as the “perfect cone” because of its symmetric conical shape, the volcano and its surrounding landscape was declared a national park on July 20, 1938, the first in the nation. It was reclassified a Natural Park and renamed Mayon Volcano Natural Park in the year 2000. Local folklore refers to the volcano being named after the legendary princess-heroine Daragang Magayon (English: Beautiful Lady).

Mayon is the archetype of a symmetrical stratovolcano and one of the world most active ones. It has frequent eruptions producing pyroclastic flows, mud flows and ash falls that repeatedly triggered large-scale evacuations. Mayon’s most violent eruption, in 1814, killed more than 1200 people and devastated several towns.

The volcano rises 2462 m above the Albay Gulf and has very steep upper slopes averaging 35-40 degrees capped by a small summit crater.
Historical records of eruptions date back to 1616 and range from strombolian to basaltic plinian, with cyclical activity beginning with basaltic eruptions, followed by longer term andesitic lava flows. Eruptions occur predominately from the central conduit and have also produced lava flows that travel far down the flanks. Pyroclastic flows and mudflows have commonly swept down many of the approximately 40 ravines that radiate from the summit and have often devastated populated lowland areas.

The best time to climb Mount Mayon will be between February to April. Climbing the Mount Mayon is highly depending of the weather condition and volcano activity. We are closely monitoring weather and volcano seismology. There are severals camps on the slopes of Mount Mayon:

Base camp (250m above see level): the camp is accesible by car, this is the start of the trekking.

Camp 2 (1800m above sea level): is situated beside a dry waterfall bed or popularly known as the “gulley” or “water source”, climbers reach this camp site after a four to five hour long trek and climb from the base camp. Camp 2 also offers spectacular view of the city of Legazpi and the ocean.

From Camp 2, there would be a 5 to 7 hours hard trek to reach the crater of Mount Mayon.  Trekkers would be passing straight up the gulley towards the summit.  This part of the leg is definitely not for the weak as this is best recommended for intermediate or advanced climbers.  Upon reaching the summit, you will be rewarded with an unbelievable view of the Legaspi City and the islands next to it.