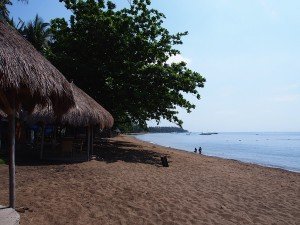 Camiguin Philippines
Travel Authentic Philippines organises several Camiguin tours. Camiguin is an island province located in the smattering of islands in the center of the Philippines. Administratively, however, it forms part of Northern Mindanao, the large landmass of Southern Philippines. In a country full of tropical paradise islands, Camiguin takes one of the top spots.

The island is very easy to travel around in. It has relatively decent infrastructure with regard to accommodations and beach resorts, a highway circulating the island, and built-up tourist attractions. It’s a volcanic island and many come here to experience the hot and cold springs, see the lush jungle, enjoy pristine waterfalls and beaches, taste some sweet tropical fruits, and wind down in the slow pace of island life.

Entry to the island is either via air or water. Camiguin Airport is served by daily flights from Cebu, the transport hub of Southern Philippines. From Manila, visitors can either connect in Cebu or fly to Laguindingan Airport, the main entry point for Northern Mindanao. From there, visitors will connect via road to Cagayan de Oro towards Balingoan Port to catch any of the regular ferries to Camiguin.

Many parts of the Philippines including Camiguin have their dry season in the months of January to May. Temperatures are ideal during the first three months of this window. April and May can get unbearably hot and it is the high summer season for the entire country. Airports, seaports, and the tourist attractions themselves can get especially crowded during this time of the year. 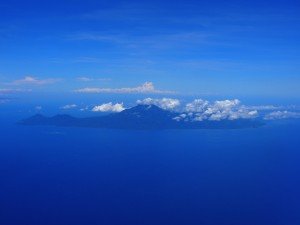 Hibok Hibok volcano Camiguin tours Philippines
Many visitors stay in the island for three days, as this is the ideal amount of time to completely experience all the things this island has to offer. Perhaps most notable of all tourist attractions in the island is the White Island. This is a small beautiful atoll just 30 minutes off the coast made up of just a white sand bar. Boats can be easily hired from the beach resorts or from boatmen in the village of Agoho. All Camiguin tours feature a visit of White Island.

Another small island tourists like visiting here is called Mantigue. Accessible from Mahinog on Camiguin mainland, Mantigue (which is sometimes referred to as Magsaysay Island), is a small island with crystal-clear waters and white-sand coral beaches fringed by coconut trees.

On Camiguin mainland, visitors can hire tricycles or vans for guided tours around the many tourist attractions. Bicycles or motorbikes are also available for independent travelers. One stop worth seeing is the Katibawasan Falls, one of the Camiguin tours you can do. Water drops 250-feet drop from the top of a cliff and taking a dip in the very cold waters below is a popular tourist activity.

Another cold dip can be had at Santo Niño Cold Springs. The area has large pools able to accommodate a lot of people. Those who prefer taking a dip in warm waters, however, can head to Ardent Hot Springs. This is a natural hot spring powered by the geothermal energy of this volcanic island. Various pools are laid out on the side of a hill. Both areas are popular with families with children.

The springs are located at the foot of the most prominent volcano here, Mount Hibok-Hibok, which itself is a sight to behold. It can be seen in many places around the island. However, the view from White Island off the coast of the mainland is one of the most spectacular sights of this part of the Philippines. 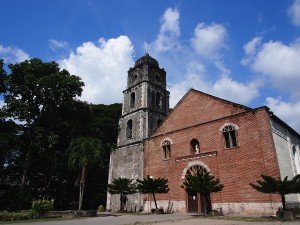 Camiguin Philippines
Seeing the tourist attractions of the island can be combined with the popular tourist activities of the island. With an elevation above 4,000 feet, Mount Hibok-Hibok is beautiful from afar. Those adventurous enough can certainly go hiking to the summit of this volcano, too. There is an established trail jumping off from near Ardent Hot Springs climbing through beautifully lush jungle. The summit can be reached in three to five hours. It is one of the best Camiguin tours!

Another hiking trail climbs up to Mount Vulcan, another summit on the island. The trail here follows what is called the Stations of the Cross with monuments depicting Jesus’ crucifixion story. Mount Vulcan is a younger, smaller volcano and was formed in an eruption in 1871.

If there is one food Camiguin is known for, it has to be the lanzones. This tropical fruit grows throughout Southeast Asia but in the Philippines, Camiguin is particularly known for it. The small fruit is sweet, a little bit sour, and juicy. Lazones are sold everywhere in the island at very affordable prices.

Water activities in Camiguin as well as in nearby White Island and Mantigue Island include snorkeling and kayaking. One snorkeling area that comes highly recommended is the Sunken Cemetery. The 1871 eruption, which created Mount Vulcan, sunk a huge part of the island. A part of the sunken area is a cemetery. The only thing visible today above the water is a white cross. 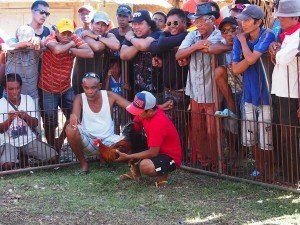 Cockfighting on Camiguin Philippines
Like much of Southern Philippines, the language predominantly spoken in Camiguin is Cebuano. This is a language distinct from the national language—Filipino. However, there are common words such as salamat for “thank you.” Visitors need not worry, as most people, especially those who deal with the tourists that come to this paradise, will know how to speak English.

The origins of the island can be traced back to Manobo ethno linguistic group. These original inhabitants crossed over from Mindanao mainland. The name Camiguin is said to have come from the Kamagong tree, which grows abundantly in the mainland.

The Spanish also arrived in the island establishing a watchtower and, by the late 1600s, a settlement. It was destroyed in the Mount Vulcan eruption but the name Catarman was still used to name one of the municipalities in the province.

It is worth coming here in October, as this is when Camiguin celebrates the Lanzones Festival. The beloved fruit of the island is the main star of the show. It is featured in the colorful banners, streamers, floats, and costumes of the locals. The same locals take part in large and loud street parades and dance performances held during the festival. Join us on our Camiguin tours.