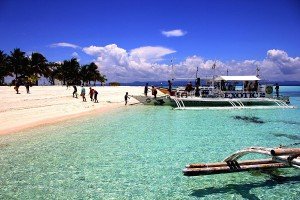 Leyte Philippines
Situated in the beating heart of the Philippine archipelago is one of the nation’s most underrated travel destinations: Leyte-Ormoc. This island province shies away from heavy tourism, making it ideal for tourists looking to ‘get off the beaten track’. Nevertheless, the island does boast several interesting historical landmarks, and unveils plenty of scenic spots to explore too. Travel Authentic Philippines offers a number of Leyte tours.

This Eastern-Visayan island might not have the international reputation like Boracay and Palawan. However, it stills features a host of fascinating sites. Lake Danao welcomes outdoor-lovers year-round with its natural ambience and entertaining activities. Kalanggaman Island rates as one of the Philippines most pristine virgin islands. In addition, the overall charm of this quiet and chilled-out provincial island is absolutely enticing.

Transportation to and from Leyte-Ormoc is in abundance. Flights from Manila to Tacloban Airport occur three times daily, and ferry routes between the Philippine capital and Tacloban are offered three times a week. Traveling by van or coach is also possible. Once in Leyte, transportation around the island can be somewhat unreliable, so patience is certainly a benefit for travellers. Jeepneys are common, and so are vans and coasters. Of course, kayaking the coast is always a popular option, and sea-faring bancas are a cheap method to island hop.

The eastern side of the island, including the capital city Tacloban, was hit by a powerful hurricane in 2013, leaving significant damage to the coastal areas. However, extensive work has been done by local and national governments to bring the province back to its former self. This is particularly evident with the sustainable agriculture trend sweeping the island.

The Eastern Visayas usually experience hurricane activity, and the island of Leyte is never spared when they hit. Heavy rainfall occurs between November and January, but most other months experience some rain, so it is rarely dry for long. 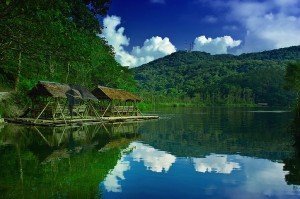 Leyte Philippines
When visiting the island, most tourists stay in the major city of Tacloban, which sits on the eastern coast of Leyte. It’s the most progressive metropolitan area in the province, and the easiest spot from which to find transportation. This makes it easy to reach the many natural and historic landmarks. It made world headlines in 2013 when typhoon Haiyan devastated it, and again in early 2015 when the Pope visited. You can witness the rebuilding of this plucky place. Ormoc is the other main town found in the province. It is a short distance to Lake Danao, Leyte-Ormoc’s most attractive natural attraction.

The violin-shaped Lake Danao is a popular haunt for locals and tourists, thanks to its swag of natural highlights and entertaining activities. It is found in a mountainous pocket of Leyte, just a short distance from Ormoc. Tourists can rent boats, go fishing, enjoy floating cottages, and plenty of other outdoor activities.

One of the most pristine and iconic islands found in East Visayas is Kalanggaman Island. This white-sanded island is post-card perfect, and reachable via speedboat or ferry. It’s ideal for just lazing back, soaking up the rays and enjoying a relaxing beach getaway. Cottages are available, and camping is another way to stay.

Among the Philippines’ most important historical landmark is the Leyte Landing at Red Beach. This is the site of General MacArthur’s return to the Philippines during the Second World War, and has become a symbol of liberty for locals. The Cap Building, where General McArthur set up his war headquarters, still rests in Tacloban City. It features a small art gallery and museum-like exhibits, so is definitely worth a look.

Another Second World War landmark is the Buga Buga Hills. This is where some of the most ferocious fighting between Japanese and American forces took place. Even though Leyte-Ormoc tends to be quiet when it comes to tourism, this site regularly plays host to Japanese tour buses. 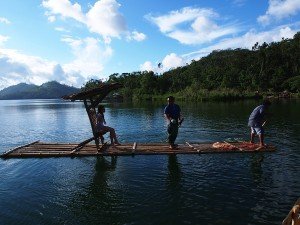 Leyte Philippines
Eat pineapples! Leyte is famous for its sweet pineapple produce. Ormoc is the most common place to find these light sweet natural delights. They are commonly used to make desserts too, so sampling some of the local dishes, including cassava cake, is a must.

Leyte –Ormoc is an island, and there is no better way to explore the coastline than by kayaking. Renting kayaks is simple, and plenty of popular spots can be uncovered, including the famous San Juanico Bridge.

Nature trekking near and around Lake Danao is always a great way to get out and about. The mountainous landscape, quiet surroundings and plethora of tracks make this lake a fantastic place for nature lovers. Mountain biking is also common.

The side of Leyte Island that faces the Pacific Ocean is home to some marvelous surfing spots. The best part about these areas is their relative isolation. This means tourists won’t be fighting for waves like in the more popular surfing areas around the Philippines. The area around Calicoan is particularly alluring for surfing enthusiasts.

Not far from Tacloban City, the provincial capital, are the magnificent Jiabong and Gubingo Caves. Tourists will adore the adventure, as guides are available to make the experience safe and memorable. It takes less than 90 minutes to reach the caves from Tacloban. 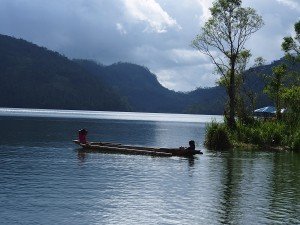 Leyte Philippines
Local culture is characterized by fishing villages, sustainable farming communities and pockets of rich celebrations throughout the year. There are also several main languages spoken throughout the province.

In the city of Tacloban, a majority of the population speaks Waray, which is also used across Leyte. Cebuano, however, is the main language used for conversation, with about 60 percent of the locals using this as their native tongue. English is widely used, but it’s not as prevalent as in the more tourist-heavy areas like Manila.

An alluring time to visit Leyte-Ormoc is during the month of June. The last week of this month is when the province truly comes alive. Known as the Grade Fiesta celebrations, the main cities like Tacloban and Ormoc boast plenty of festivities, including street dancing, feasts, and religious ceremonies in honor of Senior Santo Nino. In the capital, the 29th June is home to the fascinating Pintados Kasadyaan Festival.

For a more unique experience, try visiting one of the local community farms, which are in abundance. Sustainable farming techniques have become a major focus in the province, adding another interesting feature to this too-often-overlooked island of Eastern Visayas. Join us on our Leyte tours.