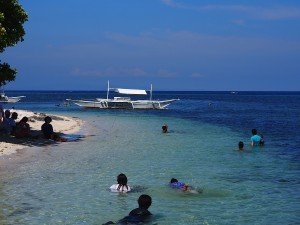 Mindoro Philippines
Located just a few hours from the Philippine capital Manila, the island of Mindoro is a popular tourist destination for many city dwellers seeking the sun, sea, and sand. The mango fruit-shaped island is divided into two provinces: Oriental Mindoro and Occidental Mindoro. Travel Authentic Philippines offers a variety of Mindoro tours.

Aside from the very popular but still quite beautiful beaches of the island, people also come for the great outdoors featuring rivers, lakes, and gorgeous mountains. Diving is also a popular activity given that the island’s proximity to one of the richest diving spots in the country.

For most tourists, entry to Mindoro is via the regular ferries from the Southern Luzon province of Batangas. The port in Batangas is only two to three hours by land from Manila. The popular tourist destinations of Coron in Palawan and Caticlan (for Boracay) are also connected to Mindoro via ferries. Those who wish to fly to the island can do so via commercial flights from Manila to San Jose Airport in the southern part of Occidental Mindoro. Buses and minivans run to the various towns along the coast of the island.

Mindoro island, as with the rest of the Philippines, has its monsoon season in the months of June to early December. When visiting during this time of the year, it is recommended to make contingency plans for ferry and flight cancellations. The best time to visit are anywhere from January to March. December holiday season and the school holiday season of April and May are also good in terms of weather, but it is best to plan ahead during these times as tourist destinations become crowded. 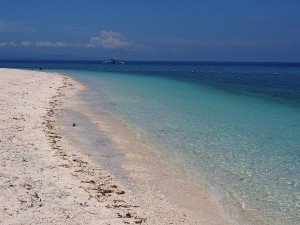 Mindoro Philippines
The most popular destination on Mindoro island is undoubtedly Puerto Galera. Located in the northeast part of Mindoro, this beach destination is just a couple of hours by ferry from the port of Batangas. This is a favorite destination for Filipinos of various age groups especially during long weekends.

The main strip in Puerto Galera is called White Beach. A number of lodges, hotels, and beach-side restaurants have been set up here. Those who prefer a little more peace and quiet can stay in the hotels and private resorts which have been built on their own islands and coves.

A good alternative to White Beach is Talipanan Beach. This is further west along the northern coast of Mindoro Island. The beach is quieter but still has tourist conveniences like accommodations and restaurants.

Just a short hike from Puerto Galera is Talipanan Falls. The waterfall is highly recommended because very few people venture out here making the pools at the bottom of the cascade in the middle of the jungle a very good place for swimming.

Another recommended beach area is the town of Sablayan in Occidental Mindoro. Visitors can also head to North Pandan Island, just off the coast from Sablayan, for more beautiful sandy beaches.

For adventure seekers, the island of Alibatan, also called Target Island, is a good place to go to. Located off the southern coast of Mindoro in Bulalacao Bay, Alibatan Island can be reached via outrigger boats from the town of Baco. The tiny island has white-sand beaches and is noted for its wildlife featuring turtles and seagulls. 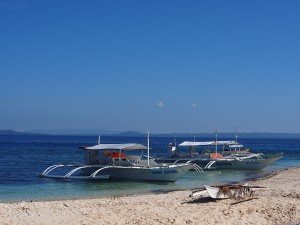 Mindoro Philippines
The most well-known destination in Mindoro, apart from Puerto Galera, is Apo Reef (not to be confused with Apo Island in the Central Visayas). Apo Reef is located off the western coast of Mindoro with the town of Sablayan as the most popular jump-off point. Diving is of course the best activity that can be done here as it is the largest coral reef system in the Philippines. The reef has an area spanning 106 square miles. It is a protected natural park. Being a center of marine biodiversity in the Philippines, it has become one of the most popular dive spots in the country.

On the other side of Mindoro, adventure seekers can base themselves in the town of Calapan. It is the provincial capital of Oriental Mindoro and has many eco-tourism sites of note. Island-hopping is a recommended activity covering the islands of Baco-Chico or Silonay where visitors can go swimming, snorkeling, and kayaking. River-cruising or even kayaking is also possible along the Baruyan River, also in Calapan. The river ends in the peaceful Caluangan Lake.

Hiking in Mindoro will almost certainly involve the highest peak on the island: Mount Halcon. With an elevation of more than 8,400 feet above sea level, trekking to the summit, which will involve multi-day camping, is possible. The summit is especially beautiful as it rises above the clouds, earning the nickname Lagpas Ulap (‘past the clouds’ in Tagalog).

Trekking around Mount Halcon is also highly recommended because the area is rich in wildlife. This is especially true for bird-watchers as Mindoro is home to local and migratory species. Visitors will also spot the tamaraw, which is endemic to Mindoro. The tamaraw is the straight-horned relative of the common water buffalo. 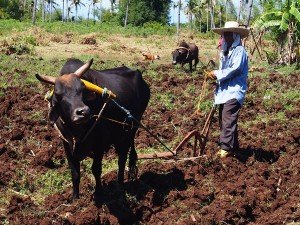 Mindoro Philippines
Administratively, Mindoro forms part of the Southern Tagalog region along with the provinces of Southern Luzon. The main language here, therefore, is Tagalog. However, those working in the tourist industry will most certainly be able to communicate in English.

Mindoro is the ancestral home of the Mangyan peoples. This is an umbrella term encompassing the many ethnolinguistic groups of Mindoro, namely, the Iraya, Alangan, Tadyawan, Tawbuid, Buhid, and Hanunoo. They have distinct languages but their vocabularies do share 40 per cent common words on average. The Hanunoo have their own script related to the Brahmic scripts used in other parts of Southeast Asia like Sumatra and Java.

Every Friday, people from remote Mangyan villages in the mountains trek for hours to the river in Bait, Southern Mindoro to set up a market and trade their goods. The produce often includes crops such as bananas, camote, and various green vegetables. These are traded for lowland wares such as clothing and footwear. It is possible for tourists to see the market, but note that locals are extremely superstitious, so it is best to ask permission first before snapping photos. Join us on our Mindoro tours.