Hiking to the crater lake of Mount Pinatubo 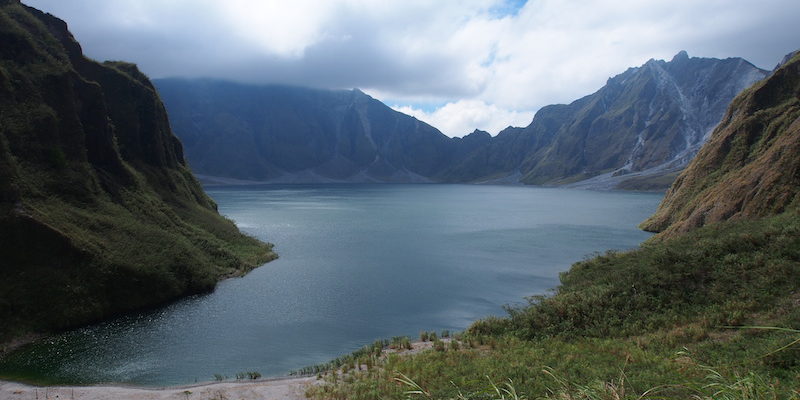 The eruption of Mount Pinatubo was the largest of our lifetime. It happened on June 15, 1991. It was an event of epic proportions. It influenced the temperature worldwide for two years. The former summit of the volcano was obliterated and replaced by a caldera of 2.5 km wide. The caldera is now a crater lake. The eruption had a devastating effect on the area surrounding the volcano. Local communities have now transformed a natural disaster into a tourist attraction that benefits communities and tour organisers. The one day journey to the crater lake now attracts hundreds of local and international visitors.

The tour involves an exciting drive by jeeps through the O’Donnell River which was one of five rivers flowing down the mountain before it erupted. It is now a trickle of what it was before. The river has been severely affected by volcanic ash and sand. Prepare yourself to become dirty during the drive. We stopped several times for taking pictures until we reached the starting point of the 5-km trek up to the crater lake. The drive took about 1,5 hours. We crossed the stream a lot of times. The trail is mostly flat but rocks make the going hard sometimes. You definitely need sturdy shoes. A local guide accompanied us.
There is not a lot of shade. In less than two hours we arrived at the crater lake which is a spectacular sight. Just to think that this volcano was some 260 meters higher before it exploded. Quite amazing. We had lunch at the crater lake before we hiked back the same way to where our jeep was parked.
In the rainy season this tour might be cancelled. The rains transform this landscape of volcanic ash deposits dramatically each year. The trail has to be surveyed each year after the end of the rainy season. The trek can be done by everyone in reasonable condition. Before you board the jeeps your blood pressure is checked. Participants who are older than 60 need a medical certificate. Try to avoid the weekends and holidays. It get very busy on those days.
Enough drinking water, a hat and good shoes are essential things to bring.
Category: TravelBy Frans BetgemFebruary 2, 2016Leave a comment