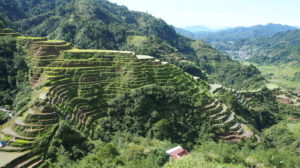 Banaue rice terraces
We have a large number of Philippines roundtrips of which we present a number of sample tours here. We recommend everyone to take at least two weeks to visit the Philippines. Widen your horizon and look further than only beaches and rice terraces. They are beautiful. Don’t misunderstand us. There is so much more though.

Most people will start their tour in Manila or Cebu City. The Philippines has 7641 islands and we recommend to visit at least two or three islands during your trip. We recommend to customize your visit to the Philippines according to your interests. The country has so much more to offer than beaches and rice terraces. The Filipino cuisine is one of the most underrated kitchens in the world. The country (and its kitchen) is a unique blend of Chinese, American, Spanish and indigenous influences. Filipino culture is really unique in Asia. The Philippines is one of the most diverse countries in the world when it comes to nature and anthropology. The islands of the Philippines are inhabited by a number of different ethnic groups.  About 15% of the population is made up of what are generally defined as indigenous people. They are the descendants of the original inhabitants of the Philippines.

The Philippines’ rainforests and its extensive coastlines make it home to a diverse range of birds, plants, animals, and sea creatures. It is one of the ten most biologically diverse countries in the world. The beaches and the underwater world are as beautiful as they come in our world.

Just look at our Philippines Roundtrips and let us know which one you want us to customize for you.